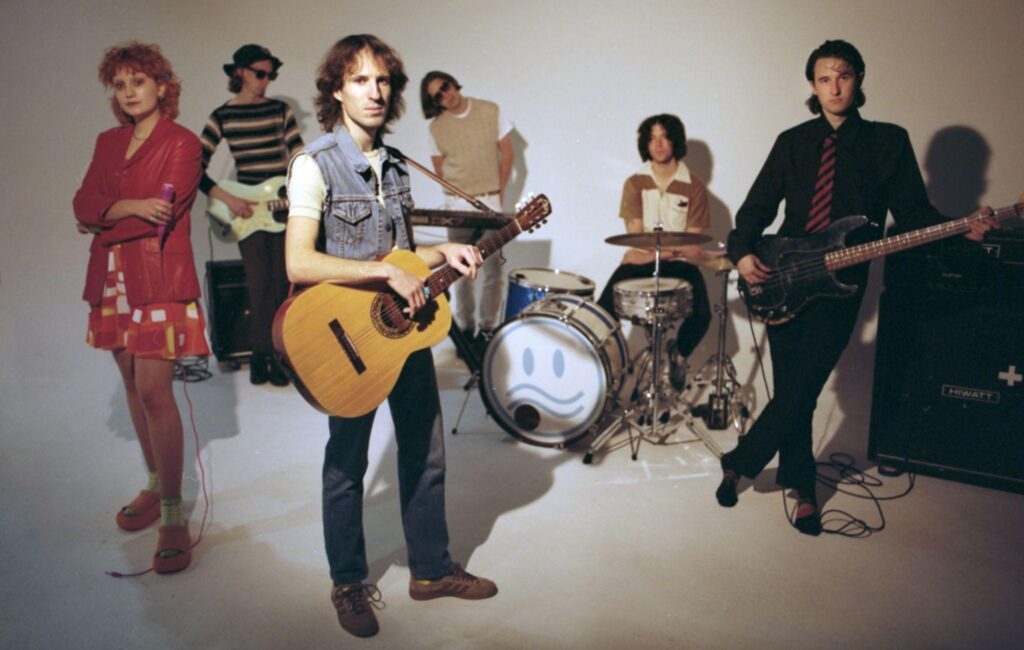 Swim Deep have released their first single in two years in the Phoebe Green collaboration ‘On The Floor’. Check out the video below along with NME’s interview with the returning Birmingham band.

Written during lockdown, ‘On The Floor’ began life as one of a series of “pretend pop songs” that Swim Deep frontman Austin Williams worked on in his fiancée’s garden shed in Golders Green – imagining that the song wasn’t for the band, but for someone else who helped him push through a creative block and led to a collaborative EP that will arrive next year.

“I’ve been writing songs for Swim Deep for 10 years now and sometimes it feels like there’s so much pressure that you put on yourself and all these filters, where you feel like you have to follow this brand that you’ve created yourself,” Williams told NME. “You’re scared of what people think and you’re scared that you could create something that you think isn’t good and then hate yourself for it – which is 90 per cent of the creative process, unfortunately.”

The musician likened putting himself in that “make-believe” headspace as like “being a kid again”. “You could do anything because it’s completely pretend,” he explained. “I’ve always had a fascination with the escapism of pretending you’re something – the first lyric I ever wrote was ‘I wanna be everything that I’m not’ [from Swim Deep’s debut single ‘King City’]. Imagining you’re writing a song for Manchester’s answer to Madonna makes all the barriers fall away.”

Williams described his vision for ‘On The Floor’ as a “rom-com anthem when the camera’s going down through a big American suburban school”. The song – the first to be taken from next year’s ‘Familiarise Yourself With Your Closest Exit’ EP – boasts a widescreen, cinematic quality, Williams and Green’s voices intertwining to continue the theme of getting lost in your imagination. “I wanna pretend / We could be something / We could be nothing at all,” they sing over lush, pastel-hued melodies.

“I wrote this song for her,” the Swim Deep singer and guitarist explained of how Green ended up on the track. “I had a writing session with her – we’d just been on tour together and she’s a good friend. I just think her voice is so deep with emotion and she has a relatable voice that, for me, feels like [it creates] a conversational atmosphere when you’re listening to her music.”

The rest of the EP, which will be released in early 2022, features other collaborations, including Aussie indie-pop singer Hatchie, Thai band Dept – who Williams described as “shoegazey, but like The 1975 [rather than] a ‘90s throwback” – and the frontman’s fiancée Nell Power.

The record’s title was inspired by a sign Williams saw on a plane on the band’s first trip to Bangkok, which made him think about getting “cosy” with or accepting leaving a part of your life behind. “You see these signs all the time, but when you see it at the right time and [then] it starts to make so much sense to your own life,” he said. “It can be super depressing to think about, but it also feels like quite an optimistic statement.”

The EP will be self-released by the band, in what Williams termed “a Benjamin Button” journey through their career which saw them release their debut album ‘Where The Heaven Are We’ and its follow-up ‘Mothers’ on a major label deal at RCA, before moving to indie Cooking Vinyl for 2020’s ‘Emerald Classics’. “It’s weird, we’ve done the whole music industry thing in reverse,” he laughed. “Now we’re completely on our own in a little raft in the middle of the ocean.”

Rather than see that as a disadvantage, Williams said he was excited for the freedom and possibilities doing things themselves could bring to the five-piece. “I can just go ahead and do what I want,” he said. “I don’t actually have to speak to anyone [to do things].”

More new music will be on the way after ‘Familiarise Yourself With Your Closest Exit’, with the songs the band worked on over lockdown sharing the same spirit as when they first started the band. “Me and Cav [McCarthy, bass] were saying to each that the songs that we were writing – which I plan to be album four – were born out of this pure naivety and from us meeting up because we wanted to meet up as friends, and the instruments were in the room,” he explained.

“We weren’t meeting up to write songs. But the songs that came out somehow sounded like what we would have made the first time we made music. It definitely wasn’t a throwback to ‘King City’ because we never want to do that too much, but it had the same energy and the same carelessness; it didn’t sound like anything but us again. I’m really excited by what could come of it.”

Next year will also mark the 10th anniversary of the band’s breakthrough singles ‘King City’ and ‘Honey’. In those 10 years, Williams said he’s learnt the importance of “backing yourself”. “[I’m] not the most skilled musician, necessarily, but I feel like I’m a skilled songwriter,” he added. “I’ve learnt that the confidence in yourself will prevail – and that friendship and can come out of the creative process, and amazing things can come out of a great, great bond in a band.”

‘On The Floor’ by Swim Deep featuring Phoebe Green is out now.