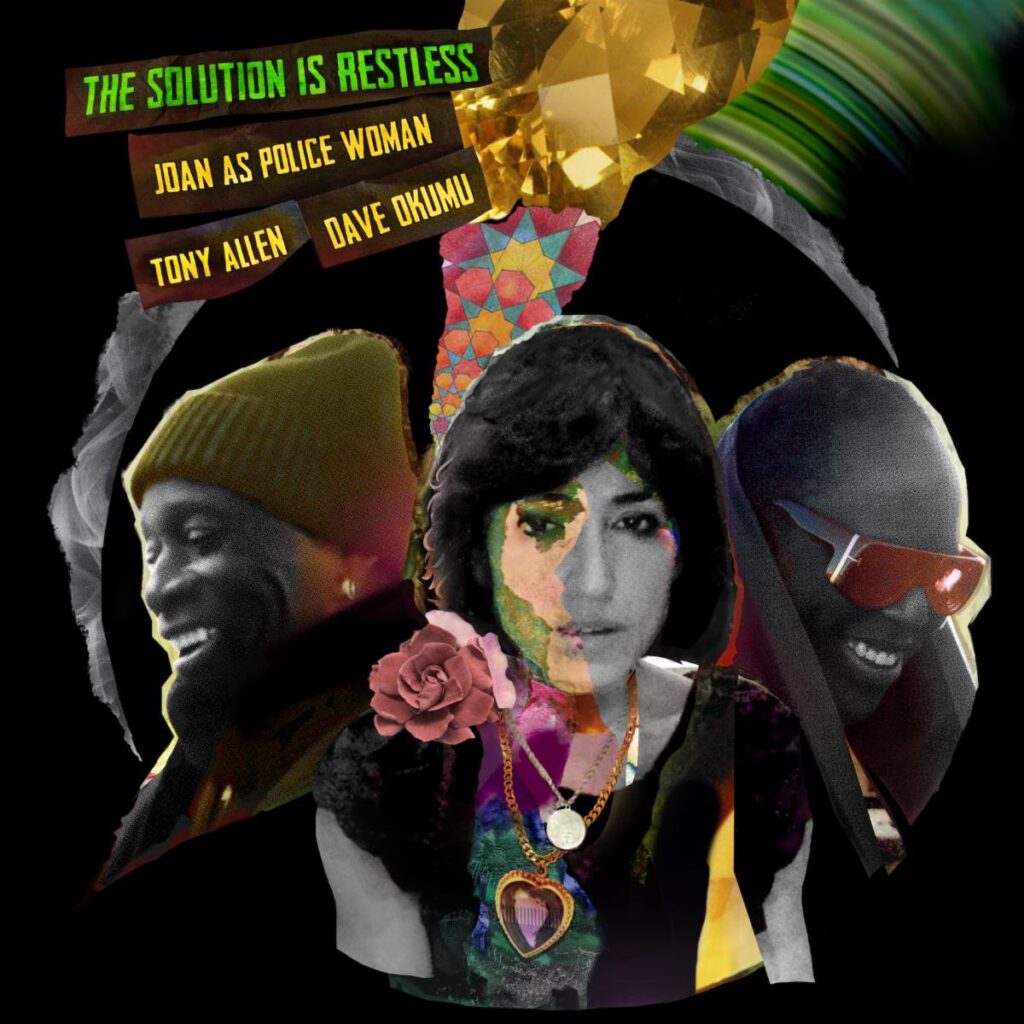 The Solution Is Restless is a fascinating and deeply rewarding new collaborative album from American rock veteran Joan As Police Woman, English/Austrian musician Dave Okumu, and the late, legendary Nigerian drummer Tony Allen. Don’t let it slip past you on this New Music Friday.

In short: Joan Wasser, the artist known as Joan As Police Woman, came into contact with Allen through their mutual friend Damon Albarn — who features on “Get My Bearings” — at Albarn’s Africa Express event in 2019. After covering Nina Simone together, Wasser and Allen agreed to hit the studio together later in the year in Paris. Wasser invited Okumu, the leader of the British group the Invisible, to join them for the sessions. Wasser left Paris with a set of heavy grooves informed by funk and dub and jazz. The following year, she pieced them into experimental rock songs that remind me of Radiohead, Moses Sumney, and D’Angelo at turns, weaving orchestral and electronic elements into the intoxicating rhythms. This music will melt your brain and haunt your soul; I highly recommend it.

Here’s Wasser with a longer version of the album’s origin story:

Damon Albarn introduced me to Afrobeat legend, Tony Allen, at the Africa Express event “The Circus” in London in 2019. Tony and I played Nina Simone’s I Wish I Knew How It Would Feel To Be Free and made a pact to record together in the future. In November of that year, our pact was realized. My old friend and fierce musician Dave Okumu joined Tony and me in a Parisian studio, where we improvised, untethered by form or tempo. I left with the tapes without knowing exactly how I’d use them.

In April I lost a beloved mentor, Hal Willner. Hal created beautiful and unlikely collaborations among artists. Hal appointed me Musical Director of Hal’s collaboration on Neil Young’s songbook in 2004 (Prospect Park) and 2011 (Winter Olympics Vancouver). Grieving Hal’s death, I began creating songs from the Parisian improvisations, only to learn of Tony’s passing while in the studio. As my world became undone, I focused on creating the new album from the Paris collaboration.

This production style danced in my mind for years. The songs are composed in various ways. For some, I used only a one-bar drum loop; for others I created blueprints around basic A/B sections we had improvised. I used the source material in every way possible. The pandemic allowed me to explore and experiment for months in my home studio.

“Get My Bearings,” which features Damon Albarn on vocals, was written shortly after Tony’s death. It’s an evocation of the incredibly thin membrane between life and death. The idea of “mysticism” is the only way to describe it. My intellect cannot place death. It’s what floats beyond where the music resides.

Stream The Solution Is Restless below.

The Solution Is Restless is out now on PIAS.