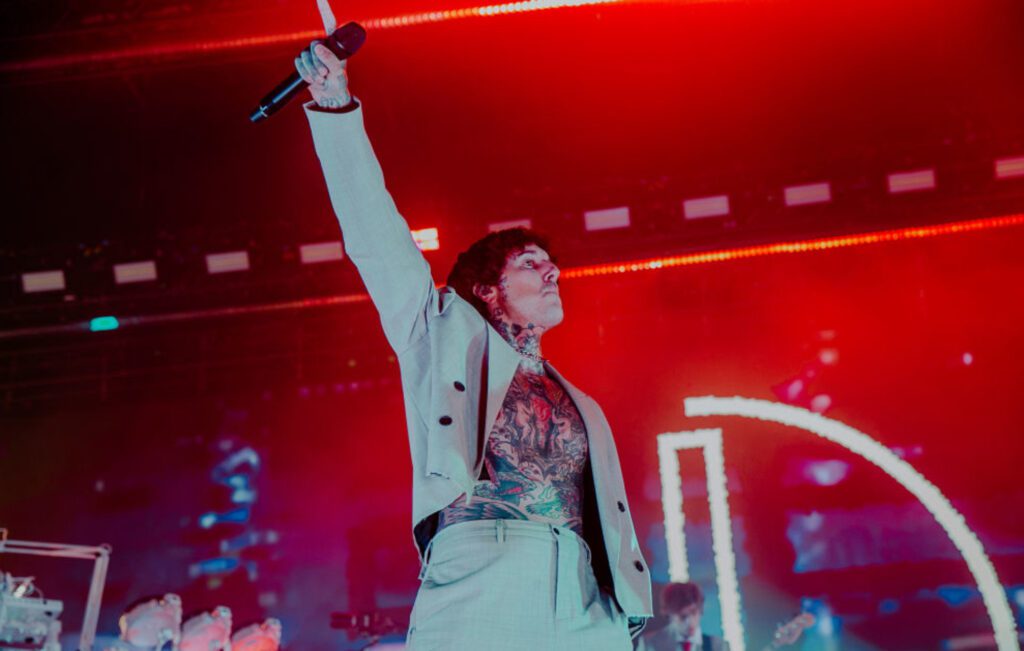 Bring Me The Horizon played an intimate show at Whiskey A Go Go in Los Angeles earlier this week – you can see footage from the gig below.

Ahead of their performance at Knotfest Los Angeles tonight (November 5), the Sheffield band put on a special warm-up gig at the 500-capacity Whiskey A Go Go on Wednesday (November 3).

Oli Sykes and co. ran through some of their older material as well as a bunch of tracks from last year’s ‘Post Human: Survival Horror’ EP, including: ‘Dear Diary’, ‘Teardrops’, ‘Ludens’, ‘Parasite Eve’, ‘Itch For The Cure (When Will We Be Free?)’ and ‘Kingslayer’.

Bring Me were joined by Yungblud at one point for a wild performance of their collaborative single ‘Obey’. Other famous friends who were in attendance but didn’t perform included Papa Roach’s Jacoby Shaddix and TikTok star Jeris Johnson.

The band shared a rehearsal video for the show, which you can see below along with footage and pics from the gig.

Bring me the horizon at Whisky a go go pic.twitter.com/w7eNHf4ELX

bring me the horizon at the whisky a go go was one for the books 🥂 pic.twitter.com/Zitd0Yscbe

You can see Bring Me The Horizon’s Whiskey A Go Go setlist below:

Meanwhile, BMTH’s Oli Sykes and Jordan Fish have been in the studio with Sigrid. “Just wait til you hear what we wrote,” the Norwegian singer captioned a clip of the trio, adding the hashtag “#Rocktober”.

Sigrid also shared a photo with Sykes and Fish on Instagram, calling the musicians “legends”.

Bring Me The Horizon recently returned with ‘DiE4u’, the next taste of their ongoing ‘POST HUMAN’ project. Speaking to NME about the song, Sykes explained that its lyrics delve into his battles with addiction.

He said: “This song is triumphant for me in a way because it’s me finally accepting that I’m not someone who can drink alcohol, smoke weed or do any of these things because I just have a problem with it and it always goes down the same road.

“That’s not something that I’ve been able to admit to myself. This song is a defiant stamp of me saying, ‘No, I’m making a choice now. I can’t keep doing this for the rest of my life because it’s only going to end up one way’.”