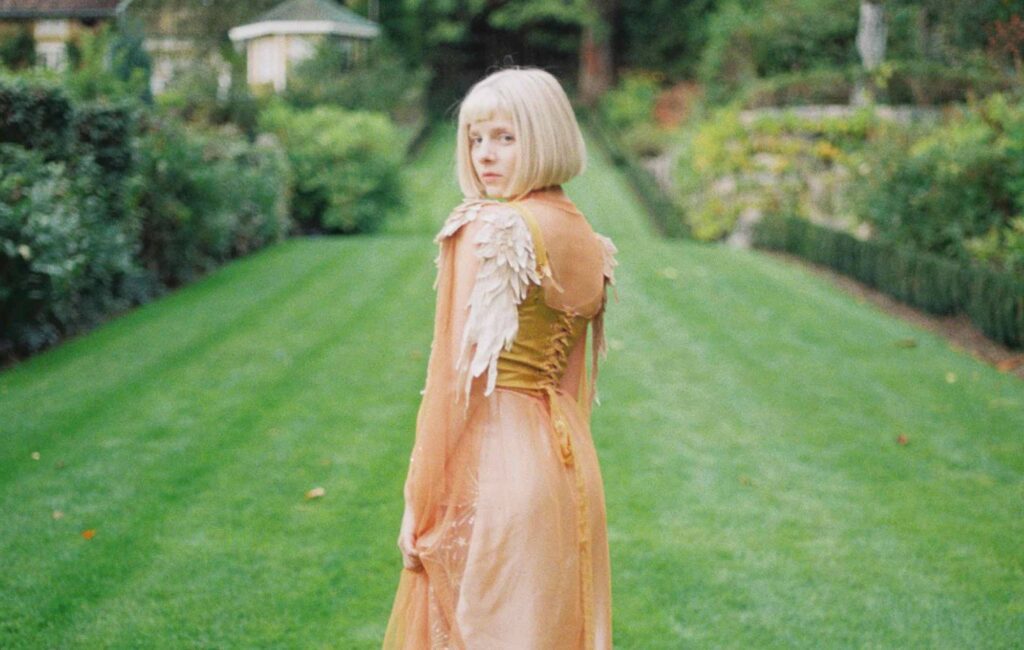 Taking place until November 12, the COP26 summit is aiming to bring parties together to accelerate action towards the goals of the Paris Agreement and the UN Framework Convention on Climate Change.

Tomorrow (November 6) Norwegian phenomenon AURORA will headline the UMA Entertainment Group’s special not-for-profit event during COP26, which will include panels, talks and live music. All profits from the event will be donated to Brian Eno’s EarthPercent charity, as well as a selection of social impact charities in Glasgow.

Having always been very vocal about her climate activism through her interviews and music, AURORA told NME how involving art in the conference “made sense” because “sometimes matters like the environment can get too political, so we need to inspire the emotional part”.

“I love Mother Earth, and for me it’s a very emotional case to be fought for our world and our environment,” she said. “She gives so much to us, and we just take and take and take. It’s so unbalanced and wrong. We’ve managed to taint something really beautiful with an ugliness.

Asked what her aim for the event would be, the ‘Runaway’ singer replied: “I want to get across how much this matters. I strongly believe that we have time to turn things around and make things better. If we don’t do something now, one day we’ll find that it’s too late to reverse all the damage that we’ve already done. We’re fighting for the wellbeing of all living things.”

Describing the current state of affairs as “heartbreaking”, AURORA said that the powers that be need to take heed of the warning signs before it’s too late.

“We’re already noticing the natural disasters, the weather changing, the water rising, the forests burning,” she said. “So many people and animals are suffering from the consequences of global warming. It’s always the richest people causing the most damage, but noticing it the least.

“People don’t seem to care about a problem until it directly affects them, which is very uninspiring and boring. Let’s just do something new and change because we can. We can either be the generation who fixes the damage of the generations before us, or the generation who truly doomed Mother Earth.”

She added: “It makes so much sense to fight for our world because it’s supposed to be eternal. We’re just visitors and we’re ruining it. It’s about saving the soul of humankind and proving who we are. We need to repent and do something.”

Asked about how she felt the music industry was handling the response to the climate crisis, AURORA admitted that “we’re never doing enough” – but positive changes could be seen. She hailed Coldplay’s efforts to reduce the environmental damage of their upcoming world tour, but said that it wasn’t so easy for smaller acts.

“I feel like there are many inspiring people out there who are doing what they can,” she said. “Asking all artists to change and go out of their way while touring to be more environmentally friendly is also like blaming people for not recycling the piece of plastic that their raw chicken came in.

“When you can, you should, and Coldplay are successful and rich enough to be able to. However, there are smaller artists out there who can’t handle that pressure. It’s more for the artists with the economy, knowledge and possibility to actually change their touring life. It’s a very hard balance to find because most of us have to tour to survive and cope with the guilt of flying all the time. But if you can do small changes, then I think it’s important to know that you don’t have to be perfect.”

It’s a notion that she applied to the wider world, calling on everyone to “do what they can” without being threatened by the bigger picture.

“It’s so important to not be intimidated by things you don’t understand [and] not feel incapable of making a real change,” she said. “We all have the power to affect the world around us by speaking our truth and fighting for what we think is worth fighting for.

While noting the power of the individual, she also argued that COP26 should result in pressure being mounted on the 20 companies who are responsible for 35 per cent of all energy-related carbon dioxide and methane worldwide.

“I’m tired of people blaming the everyday people who are trying their best and generally don’t know where to begin outside of recycling and doing our little part,” she said. “It’s time to really demand the change from the big guys who are doing the real damage.

“Do what you can – that’s my biggest wish. If you have the space or capacity then help.”

And how would she feel if she met environmental activist icon Greta Thunberg while she was in town?

“I love her!” AURORA replied. “Even though she’s very well-spoken and intelligent and knows her area so well, I feel like she’s a very good example of the balance we need in talking about matters that are both political and emotional.

“That’s why she inspired so many young people – because nobody talks to us in such a warm, emotional, intelligent, real and desperate way.”

This comes after Patti Smith claimed that the climate movement was “the most important thing in the world right now” ahead of COP26, while Massive Attack launched a campaign to target corporate “greenwashing“.

AURORA will perform and speak at ‘Beyond The Green’ tomorrow (Saturday, November 6). She will be headlining the event’s live music bill, with Sam Fischer and BEMZ (DJ set) also set to perform. DJ sets will be provided by Groove Armada’s Andy Cato, Sarra Wild and Darwin during the after-show event.

She also recently announced her new album ‘The Gods We Can Touch‘ – due for release on January 22, 2022 – before heading out on a UK and European tour from February through to April next year.