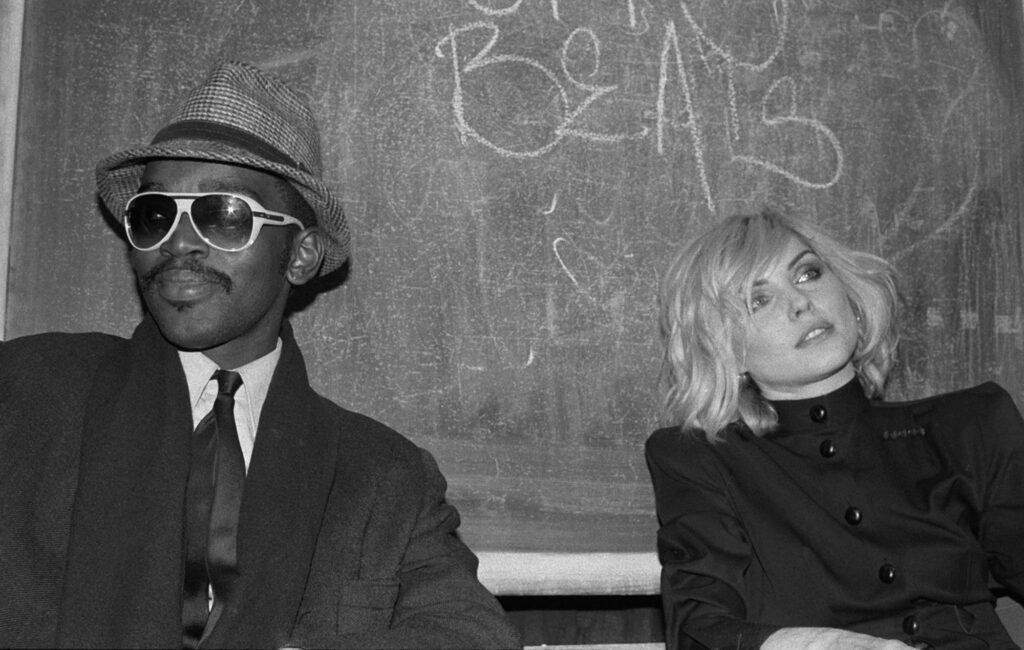 Blondie have released a new festive three-track EP featuring ‘Yuletide Throwdown’, a rare track that was co-written with hip-hop pioneer Fab 5 Freddy. Check out Cut Chemist’s new remix of the title track below, along with our interview with Blondie’s founding guitarist Chris Stein.

Blondie and Freddy then linked up in 1981 to record ‘Yuletide Throwdown’, with Harry and Freddy rapping Christmas-themed lyrics over the original backing track for ‘Rapture’.

The festive track was only released on a special flexi-disc that was given away by the UK music magazine Flexipop in 1981, but it was recently rediscovered by Blondie when they raided their personal archives for a new box set which is set for release in August 2022.

In a statement about the rare song, Harry said: “It has been an impossible amount of time since I believed in Santa Claus, but I could very well believe again if he was Freddy Brathwaite!! Some of my best times have been making music with Chris Stein and Freddy B.”

Freddy added of ‘Yuletide Throwdown’: “In the beginning of my journey into pop culture, Chris and Debbie were among the first to take me and my ideas about hip hop culture seriously and were like mentors to me shining a light along the road and assisting my quest.

“I’m happy after all this time the world can now hear this fun holiday tune we did way back then!”

To celebrate the arrival of ‘Yuletide Throwdown’, NME caught up with Stein from his New York home to talk about collaborating with Fab 5 Freddy, working on new Blondie music and why he may no longer be able to tour.

Chris Stein: “The first time we recorded the basic track for ‘Rapture’ we decided it was too slow, so we sped it up and that’s the final version we released. I had the master tapes and took a copy of the tape of the first version home, overdubbed on top of it and put Debbie and Freddy’s vocals on it. It was originally for Flexipop magazine, and it came out with other Christmas tracks I’d produced by the bands The Brattles and Snuky Tate.”

What are your memories of recording Debbie and Freddy on the track?

“They were in our home studio in the basement. Freddy just went for it. I still see him frequently, but the main thing I remember is that Freddy took us to our first rap event in 1977/78, so that was very exciting. It was the first time I’d seen something like that.”

That inspired Debbie and yourself to write your own rap track, ‘Rapture’. Did you face any resistance to recording or releasing it?

“I don’t remember much resistance to ‘Rapture’. I wasn’t sure what was going to happen with it. I’m always optimistic, but the only song we ever recorded that I ever knew 100 per cent was going to be a hit was ‘The Tide Is High’. With all of our other songs, I was never positive. We never knew what was going to happen. ‘Parallel Lines’ was floating around the charts for around six months before ‘Heart of Glass’ was released, and then it went up.”

‘Rapture’ was the first rap record to reach Number One in the US and the first rap track with its own original music. Have you ever had any feedback from rappers about its influence?

“When we did a little bit of work with the guys from Mobb Deep and Wu-Tang [they collaborated on Blondie’s 1999 single ‘No Exit’], those guys told us that it was the first rap song they ever heard, which was awesome. In 1998, XXL magazine recreated the famous 1950s photo of jazz musicians on a stoop in Harlem, but they did it with 177 rap people from that time. We were in that photo, and it was exciting to be accepted and asked to do it.”

‘Yuletide Throwdown’ was rediscovered in your personal archive for Blondie’s forthcoming box set. Can you give us any hints as to what other rarities it might include?

“I’m not positive what’s going to be in it, but there’s a ‘Sunday Girl’ demo, I think. We used to cover The Doors’ ‘Moonlight Drive’, so we did an unfinished version of that in the studio for our second album [1978’s ‘Plastic Letters’] which sounds pretty great, so it’ll be stuff like that.”

How is progress coming along on Blondie’s forthcoming 12th studio album?

“We were going to meet this week to try to go over some material, but it’s difficult with the logistics now because of the fucking plague and getting everybody together to do it. Debbie and I agree we can’t do it remotely: we’ve got to get everybody in the same place, so it’s tricky. We’re definitely working with producer John Congleton again because he’s great. Everybody’s close to him at this point. He has a great bedside manner, as it were. It’s all new songs and we have three cover versions, but I’m not going to say what they are because I’m not sure if they’ll reach fruition.”

Is there any chance of any collaborations on it?

“We’ve been talking to a couple of people, but I don’t know yet. We wanted to get [Robert] Fripp on the last record [‘Pollinator’] and he was down for it, but our guitarist Tommy [Kessler] ended up doing the parts where we would have put Fripp. So maybe we can get him later on in this next project. We used to work with him all the time back in the old days.”

In Blondie’s recent short film, Blondie: Vivir En La Habana, you mentioned you had a spell of bad health. How are you feeling now?

“I don’t know if I’m going to be participating in touring going forward. I just have some heart bullshit. I take medicine for it that’s a little fatiguing. It’s an irregular heartbeat. It’s not super-serious, but it’s just tiring and I don’t have the stamina I did when I was 30 or 40. So I mainly deal with the recording at this point. I was actually sitting down for the last couple of tours: I figured if BB King could do it, I could! We’ll see.”

How did you spend the pandemic? Did you bury yourself in any projects?

“I wrote a memoir, which took about a year. I wrote the whole thing myself, which was interesting and challenging. It covers my whole life, and the whole book is nuts. It surprises me how much crazy shit I did! Apart from my memoir, I’ve got a photobook documenting the period where we were working with H.R. Giger that I’m working on. I shot a lot of photos, so we’re trying to get that in book form.”

Blondie’s ‘Yuletide Throwdown’ EP is out now, while a limited edition 12″ vinyl version in both magenta and black – which can be pre-ordered here – will arrive on November 5.

Last week Blondie postponed their ‘Against All Odds’ UK tour until next spring and confirmed that Johnny Marr will be supporting them on all of the rescheduled dates.