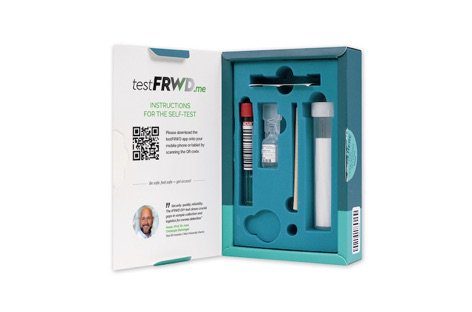 The company’s goal, according to their website, is to “safely reopen the tourism and events industry during the pandemic.” This will be done by creating “risk-free spaces,” made possible by testing up to 80,000 people a day using the kit, which is already patented globally, CE-certified and available over the counter in Austria. Results are delivered within 24 hours via the testFRWD app.

“Our DIY test kit uses the gold-standard of testing: RT-PCR with 99% accuracy,” testFRWD cofounder Veit-Ander Aichbichler told Resident Advisor. “This is the only viable—and approved by local governments—solution from a safety perspective to reopen events.”

Rather than taking a sample using a nasal swab, testFRWD requires the participant to gargle for 60 seconds, which Aichbichler says is “quicker, cheaper and painless.” Gargling has also been approved by the World Health Organization.

Aichbichler’s partner in testFRWD is Hennes Weiss, founder of Croatia’s Lighthouse Festival. They developed the kit alongside Professor Dr. Christoph Steininger, a virologist (among other things) at the Medical University Of Vienna.

“As a festival and club promoter, I realised pretty quickly that a single player cannot change the game,” Weiss told RA. “Testing will be the only way within the next six-to-ten months to enable events, grant permissions and raise capacity limits. The challenge? Current testing technologies were simply beyond promoters’ event budgets. At testFRWD, we have fought hard to bring prices down to well below market levels.”

For more info on testFRWD, including first steps for promoters and event planners, head to the company’s website.