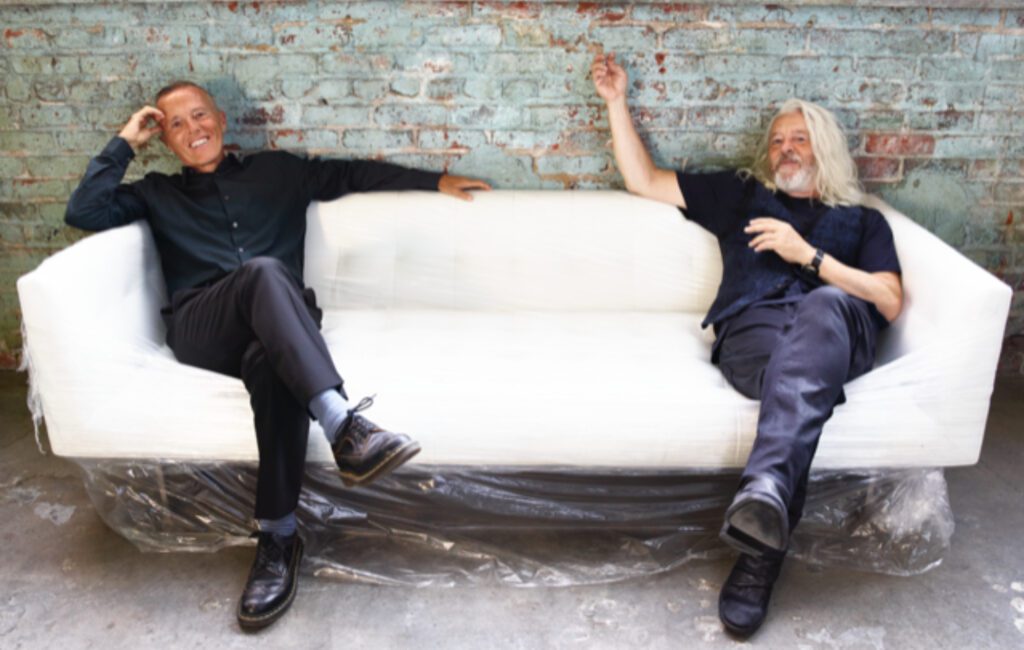 Tears For Fears release new single ‘No Small Thing‘, founding member Curtis Smith has spoken to NME about how personal and political trauma shaped their new album ‘The Tipping Point’.

Now 17 years after their last album, ‘The Tipping Point’ is a 10-song collection riven with personal tragedy and political upheaval. Smith – who formed the band with Roland Orzabal as teenagers in Bath in 1981 – told NME that the years of turmoil, which includes the death of Orzabal’s wife in 2017,  “gave us a lot to write about”. Much of the new material came from the duo going back-to-basics.

Of the new single in particular, Smith said: “‘No Small Thing’ was a song myself and Roland wrote together. It was the very beginning of 2020 and we were at this point where we had effectively an album’s worth of material that we didn’t particularly like – and we were trying to find a direction.

“So we decided for the first time since we were 18-years-old to sit in a room, both of us with acoustic guitars, and try and write something. It’s the opening track on the album and an important one in that it gave us a direction, but because of the way we approached it, it sounds more Johnny Cash than Tears For Fears.”

In the summer of 2017, Orzabal’s wife Caroline passed away. When she hit the menopause, she was prescribed medication that you shouldn’t drink alcohol with while taking. Nevertheless, she did and experienced crippling depression before developing cirrhosis of the liver, then alcohol-related dementia. Orzabal became her carer for five years and started writing songs that would surface on ‘The Tipping Point’ as a distraction and release: the eponymous first single and gut-wrenching ‘Please Be Happy’ both painfully address watching someone you love deteriorate.

Speaking to NME via Zoom from his home in Los Angeles, Smith explained how ‘No Small Thing’ was an attempt to re-discover themselves after a string of failed attempts to write with hitmakers, while ‘The Tipping Point’’s touchstones take in everything from The 1975 to toxic masculinity.

Before you hit that crisis-point of sitting with acoustic guitars, you had been working with by-committee songwriters at the behest of your management. Why didn’t it work?

“We’d worked with some people who’d worked with The Weeknd, and one of the guys from Bastille [frontman Dan Smith – who they’d previously collaborated with on the 2017 Tears For Fears song ‘I Love You But I’m Lost’ and with whom they’ve written an unreleased song called ‘Your Skull’s A Drum’]. They call it musical ‘speed-dating’. Some of them were quite good, but the rest just sounded like us making this vain attempt to do something modern, which ended up sounding dishonest to is.

“We’re not knocking it, because we did learn what we didn’t want to do – sometimes when you go into an album, that’s half the battle! We were working with modern producers who were heavily based around electronic sequencing, so our next step was to go in the opposite direction and sit in a room with two acoustic guitars – which led us to ‘No Small Thing’.”

Musically, who were you influenced by for ‘The Tipping Point’?

“We’re influenced by everything we listen to and that includes certain amounts of modern music. I’m not someone who’s sentimental about a certain decade. I’m a big The 1975 fan, so that’s going to be an influence. I like Phoebe Bridgers, Bon Iver, Rex Orange County – so some of that stuff will unconsciously rub off.”

Tragedy looms over the album, such as Roland experiencing the illness and death of his wife. How do you feel it affected the record?

“In a big way. If you can find nothing to write about after what we went through in the past few years – personally, with Roland’s wife passing and also globally, with Black Lives Matter with the #MeToo movement, with Donald Trump being in power for four years, the rise of the right-wing worldwide, and the climate crisis; then you shouldn’t be songwriters. It’s been a bunch of years with a lot of turmoil – personally as well as politically – which has given us a lot to write about.”

“It’s incredibly emotional when you’re writing about someone you’ve known for that long. It’s not like an acquaintance or someone you’ve known for a few fears – this was Caroline. This was someone I knew since I was 13-years-old; and Roland the same. Apart from family members, who else can you say that about? In that sense, it’s far more devastating when you lose someone like that, because not only do you mourn their loss, but you’re left thinking about your own mortality and what you can do to allow that to not happen to you. It’s a difficult thing to get over.”

Has it brought you and Roland closer?

“Yes, because it was something both of us had in common. Obviously I wasn’t married to Caroline and didn’t spent as much time with her as he has to any degree, but she’s from both of our childhoods. There was a sense that nobody knew her as well as I did, apart from Roland; so we related to each other over that.”

Did you talk to each other about those personal songs and what they meant?

“No. The songs and their meanings were obvious. That’s the strength of the bond we have – that you don’t need to explain those things. They’re blatantly obvious to us.”

The album track ‘Break The Man’ is about shattering the patriarchy. What needs to change?

“Four years of living through Donald Trump and also the #MeToo movement sparked that song. I’m lucky to be in a family surrounded by strong women: my wife and daughters. Women have this calm wiseness about them that men don’t, because we’re too busy showing how big our dicks are most of the time. We saw so much of that with Trump in America: the idea of ‘we are real men’, and the trouble it caused.

“This toxic masculinity spurred wars and the hatred of others – the idea of: ‘I’m stronger and I need people weaker than me and I’m going to show them they’re weaker than me’. In America, that became everyone hating immigrants and the notion that a woman’s place is in the home. It’s nonsense, and we could do with a more empathetic leadership – preferably from a woman. That was where that song came from.”

Did you witness any of that toxic masculinity in the music industry in the ‘80s?

“I mean, I saw it go on. My wife [marketing executive Laura Pennington] experienced it once when she bailed out of somebody’s hotel room when they asked her for a meeting and she realised it wasn’t quite what they said they intended, so luckily she was never abused. I hope it’s generational to a certain degree, so that the younger generation of women are on a far more equal footing.”

‘Stay’, the closing track of ‘’The Tipping Point’ (remixed from a version that appears on the 2017 greatest hits compilation ‘Rule the World’) was written about a time when you were considering leaving Tears For Fears again. Why?

“We’d been through the speed-dating process and I didn’t like where it was going. People might think I threw a tantrum, but it wasn’t like that it. I said to Roland: ‘If you want to do that, then go ahead, but I’m not feeling it. It’s not representative of me, it’s not something I like and I can’t be involved in putting out something I don’t like. It’s a pointless exercise. I don’t need to do it, so why should I?’ I got to a point where I said: ‘If you feel it’s the right thing to put out, I would have to step away form it’. Which is a fairer way of putting it than just: ‘That’s it! I’m going to leave!’

“I was thinking about walking away and realising how sad that is. That song’s about the sadness you feel about leaving something behind that you’ve invested so much time and energy into and that’s been a huge part of your life.”

‘The Tipping Point’ is released February 22, 2022, via Concord Records. The band tour the UK in July. Check back at NME soon for them sitting our Does Rock’N’Roll Kill Braincells?! feature.