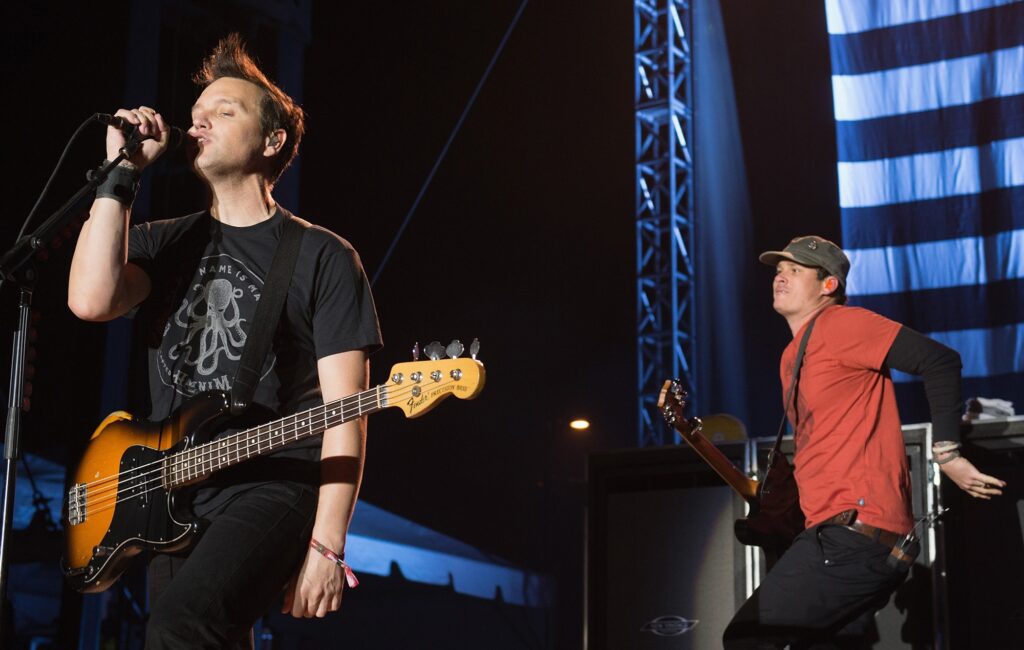 Mark Hoppus has opened up about his newly rekindled friendship with Tom DeLonge, saying that as far as he’s concerned with the potential of a late-‘90s era Blink-182 reunion, nothing is off the table.

For years, rumours have swirled that DeLonge would eventually return to the iconic pop-punk outfit. Those rumours heated up last month when the former guitarist and co-vocalist – who left Blink in 2015 “to change the world for my kids” – hinted that he’d finally linked back up with Hoppus and drummer Travis Barker. Adding to the conversation was Alkaline Trio‘s Matt Skiba (who replaced DeLonge upon his exit) admitting he didn’t know whether he was still a member of Blink.

Hoppus quashed those rumours earlier in August, assuring fans that the band had “no news to share” on the matter. Writing in a Discord chat, he also ribbed the media for using DeLonge’s reunion tease as an opportunity to farm traffic: “If and when blink has any announcement about anything, you will hear it from the official blink-182 outlets. Not teased on a radio station like ‘tune in for a major announcement…Tom tagged Mark in a photo from two decades ago.’”

Speaking to People earlier this week, Hoppus clarified that while Blink have not reunited with DeLonge, he and Barker did meet while Hoppus was receiving treatment for his recent battle with cancer, and a reunion is not explicitly off the cards (as he’d said it was in previous years). “I keep writing music, and I’m open to whatever the next phase of Blink is,” he told the publication. “I’m hopeful for the future. I’m just damn glad to be here.”

Hoppus explained that shortly after Barker and DeLonge had learned of his diagnosis – the singer/bassist revealed his battle with cancer (stage 4-A diffuse large B-cell lymphoma) publicly last June – the pair made a group visit to him. “It was the first time that all three of us were in the same room in like five years,” he told People, noting that despite the heavy topic at hand, the meeting with his current and former bandmate was “actually better than it used to be”.

He continued: “There was no agenda. There were no lingering grudges. It felt very back to what it should be: three friends sitting in a room.” Reconnecting with DeLonge, Hoppus said, offered him a “panacea” during what he described a “brutal” chemotherapy sessions. As for the current state of their friendship as a trio, Hoppus assured People that “everybody’s in a really great place right now”.

Hoppus was declared cancer-free last September, and a few months later, said he would be open to making a comeback with Blink, in whatever form that would be. Back in April, he teased that he’d been working on new music, saying in an interview that he’d been itching to “get back into the studio” after beating cancer.

Last September also saw DeLonge open up about his reconnection with Hoppus, telling Apple Radio 1’s Zane Lowe: “The way the universe works is strange because I reached out to Mark because I needed him to sign this piece of paper that had to do with my divorce. Only because of that call did I learn he had cancer. And he told me on the phone. I was like, ‘Wait, what?’ And we weren’t really talking much at all, maybe once every couple of months, a little text here and there.”

The trio of Hoppus, Barker and Skiba recorded two albums together – 2016’s ‘California’ and 2019’s ‘Nine’ – and have toured extensively. Their last show together went down in the early months of 2020. Blink performed last October as part of Barker’s ‘House Of Horrors’ broadcast, however Skiba was not present – Kevin Gruft (of Escape The Fate) performed with the band in his place.

Meanwhile, DeLonge is gearing up to release his directorial debut, Monsters Of California, later this year. The first trailer for the film arrived in May – check it out here.