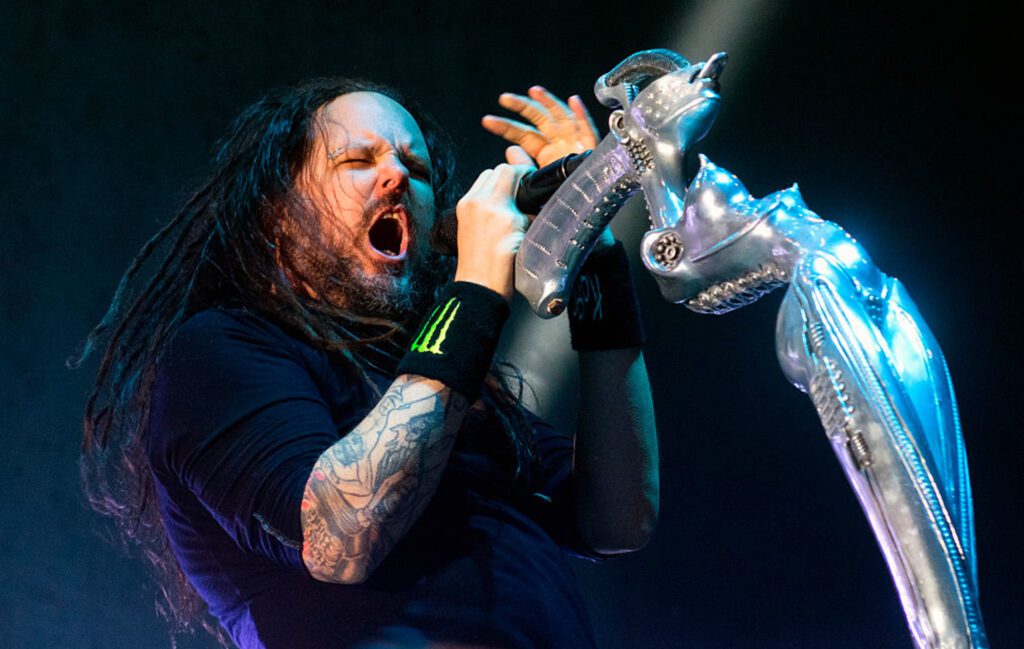 Korn appear to be teasing the arrival of a new track possibly titled ‘Now’, which might be the next preview of their forthcoming album ‘Requiem’.

The nu-metal icons announced in November that the follow-up to 2019’s ‘The Nothing’ will be arriving on February 4, 2022 via Loma Vista. The announcement came alongside the release of the album’s first single, ‘Start The Healing’.

Now, it looks as if they have another new single on the way if the mysterious teasers they’ve just released are anything to go by.

Fans who visit Korn’s website at the moment will be greeted by six hands, each squeezing a heart-shaped face – it’s the same imagery depicted on the ‘Requiem’ album art. While most of the hands are in fuzzy black and white, three of the hands can be seen in colour – one in purple, one in yellow, and another in blue.

Written at the bottom of the page are the words: “PULLING AWAY THIS VEIL I SEE…”, which when clicked opens an audio file that plays 27 seconds of drumming. Fans can download the file, which is titled “Korn01-Now”.

Clicking on the purple hand leads to YouTube’s homepage, but not to any specific video. The yellow hand, meanwhile, opens a sign up page for fans to fill out in order to get Korn updates.

The band have shared pictures of three hands on Instagram.

‘Requiem’ will be the band’s first album since bassist Reginald ‘Fieldy’ Arvizu announced he’d be taking a “hiatus” from the band last year.

Fieldy said he’d be stepping away from Korn in June, saying he had fallen “back on some of [his] bad habits” and needed “some time off to heal”. The band’s frontman, Jonathan Davis, opened up about the news recently, noting the vulnerability of watching “somebody I care about die” and how he’s “not going to fucking do that again”.

In November, Davis opened up about the after-effects of his fight with COVID-19, saying that the experience left him “scared shitless”. He was one of three members to contract the virus on Korn’s recent tour, alongside guitarist James ‘Munky’ Schaffer, and drummer Ray Luzier.

Meanwhile, a new book that details every song KoRn have ever written was recently released in the UK.

Korn: Every Album, Every Song by British author Matt Karpe is a deep-dive into the lyrics, song compositions and stories behind each and every track ever penned by the US nu-metal band. It includes B-sides, standalone singles, unreleased material, and songs that have only ever featured on film and gaming soundtracks.