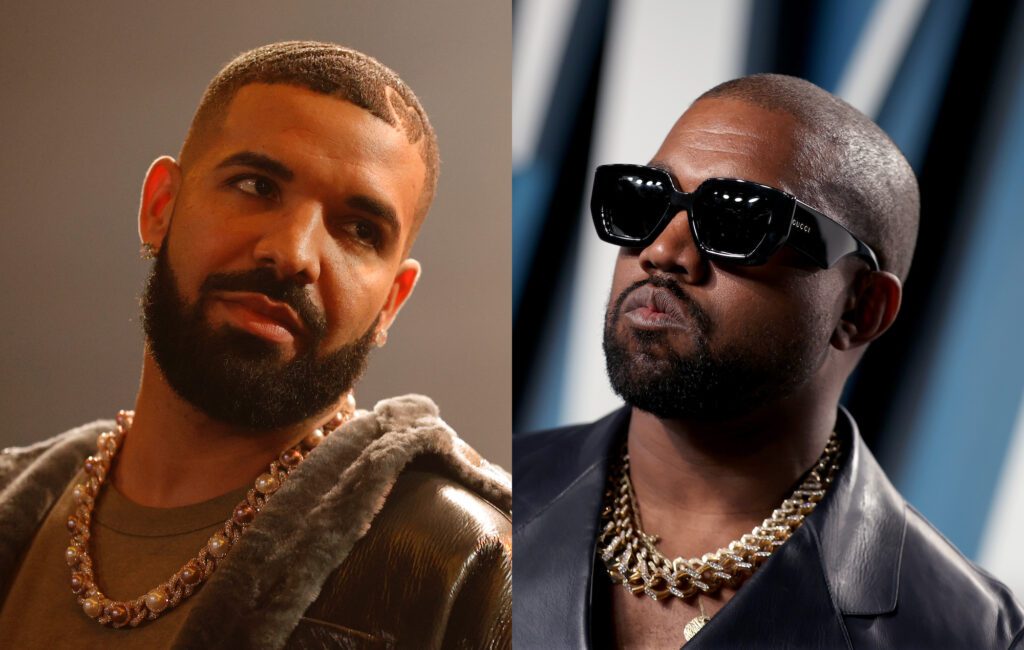 Kanye West has publicly declared that he’s ready to make amends with Drake, ending an on-and-off feud that’s been active since at least 2009.

The new development comes just days after West appeared on the most recent episode of N.O.R.E. and DJ EFN’s Drink Champs podcast, during which he said he would “absolutely” battle Drake in a Verzuz episode, and spoke about the Canadian rapper’s supposed approach to the not-so-subtle art of beefing.

Overnight, however, West linked up with J. Prince to offer Drake a resolution to their feud, inviting him to collaborate on a live show celebrating “the two biggest albums of the year” (West’s ‘DONDA’ and Drake’s ‘Certified Lover Boy’). The prospective show would also serve as an avenue for the pair to raise awareness for Larry Hoover, who is currently serving six life sentences for charges relating to gang activity.

“Both me and Drake have taken shots at each other and it’s time to put it to rest,” West said in a video, reading from a statement on his phone. “I’m asking Drake on December 7 to join me on stage as a special guest to share the two biggest albums of the year, live in Los Angeles, with the ultimate purpose being to free Larry Hoover.

“I believe this event will not only bring awareness to our cause, but prove to people – everywhere – how much more we can accomplish when we lay our pride to the side and come together.”

Take a look at West’s video statement below:

I met with @kanyewest night in Htown at the Rothko Chapel. It wasn’t in my plans to meet him there but I must say I’m glad I didn’t allow a worship place for God to detour our meeting. pic.twitter.com/GM9FIN80Uj

In a series of tweets, Prince explained that he’d bumped into West at the Rothko Chapel in Houston, Texas, opening the rapper’s eyes to a perspective on the beef that he’d not yet considered.

“There will come a time in life where we all should embrace the movement thinking, over the moment thinking. Moment thinking gets us stuck in the cycle of confusion, revenge, killings, and things of darkness that take you to a place worse than slavery,” Prince wrote in his thread. “Movement thinkers dream of a better tomorrow, a bigger picture, longevity choices and humbling themselves to forgive.

“They don’t allow fear and pride to stunt their growth, and they’re always looking for the good in every situation and that’s where the leaders are separated from the followers. So I met with [West] to pass on the message from my brother Larry Hoover who said he would like to see peace between the two of them. Ye received this well and said thanks because he never had anyone that sat him down and explained things to him the way I did.”

After a short hiatus in recent years, West’s beef with Drake was reignited back in August when the latter hit out at West in a a collaboration with Trippie Redd. On the track ‘Betrayal’, he rapped: “All these fools I’m beefin’ that I barely know / Forty-five, forty-four, let it go / Ye ain’t changin’ shit for me, it’s set in stone.”

West then appeared to respond by calling Drake out in a group text between eight people, one of whom was Pusha T. In a post to his Instagram account, West shared a screenshot of a text he’d sent to an unspecified group chat, featuring a shot of the Joker (as portrayed by Joaquin Phoenix) alongside the caption: “I live for this. I’ve been fucked with by nerd ass jock n****s like you my whole life. You will never recover. I promise you.”

On September 3 – the day Drake released ‘Certified Lover Boy’ – West then spammed Drake’s hometown of Toronto with billboards advertising ‘DONDA’. Drake then leaked an unreleased track of West’s called ‘Life Of The Party’.

Elsewhere in his episode of Drink Champs, West talked at length about his personal life, said he regrets signing Big Sean to his label, defended his work with DaBaby and Marilyn Manson (the latter of whom joined West in a recent iteration of his Sunday Service series), and called Just Blaze a “copycat” of Swizz Beatz.

West also dedicated the latest edition of Sunday Service to the victims of the “mass-casualty” crowd crush at Travis Scott‘s Astroworld festival.