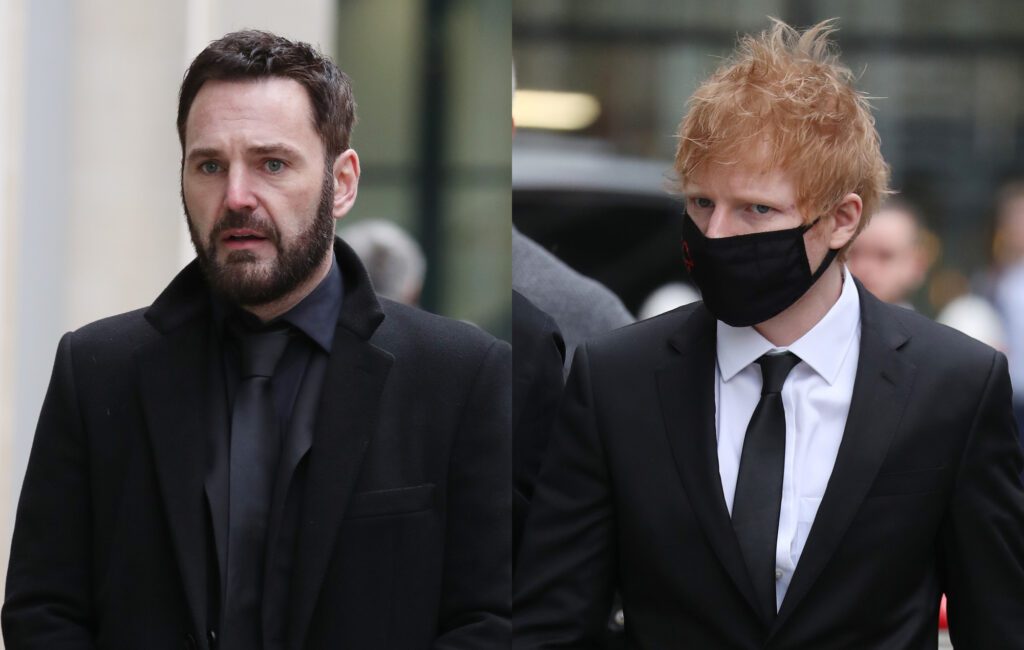 Ed Sheeran‘s co-writer Johnny McDaid has described the idea of plagiarism as “abhorrent” during the ongoing copyright court case regarding ‘Shape Of You’.

Sheeran, McDaid and co-writer Steve Mac have been accused of lifting “particular lines and phrases” for the 2017 ‘÷’ single from a track called ‘Oh Why’ by Sami Switch.

The latter artist and his co-writer Ross O’Donoghue have alleged that Sheeran took the “oh I, oh I, oh I, oh I” hook from the aforementioned song, which was released back in 2015. Sheeran has denied the claim and rejected the suggestion that he heard ‘Oh Why’ before he wrote ‘Shape Of You’ in October 2016.

As BBC News reports, Snow Patrol‘s McDaid claimed in written evidence that he could not recall ever hearing ‘Oh Why’ “in any way” and said he was unaware of Sami Switch before the current legal case began.

“I have been a professional songwriter for many years and have achieved substantial success,” he wrote.

“I do not need or want to, nor would I ever, plagiarise other people’s work. The idea is abhorrent to me.”

McDaid has also penned tracks for the likes of BTS, Pink, Rag’n’Bone Man, John Newman and Maisie Peters over the course of his career.

He and Sheeran both deny that they copied the “oh I” section. On Tuesday (March 8), Sheeran sang snippets of Simone’s 1965 rendition of ‘Feeling Good’ and Blackstreet’s 1996 hit ‘No Diggity’ in court in an effort to illustrate how the melody in question is commonplace in pop music.

“If you put them all in the same key, they’ll sound the same,” Sheeran argued.

Lawyers for Chokri and O’Donoghue played audio clips from the recording sessions for ‘Shape Of You’ to the court, in which Sheeran could be heard saying that he needed to change the “oh I” part because it was “a bit close to the bone”.

In response, the singer told the court: “We thought it was a bit too close to ‘No Diggity’. I said that… we should change it.”

McDaid, meanwhile, said there was “nothing original” about the melody. “[It] uses sequential notes from the pentatonic scale,” he wrote. “It is a very common melodic structure, in my experience.”

Recalling the “frenetic, rapid process” of creating ‘Shape Of You’ alongside Sheeran and Mac – the latter of whom also produced the track – McDaid added: “The words ‘shape of you’ came from me. It is a phrase used in Derry [Northern Ireland], where I come from.

“I am sensitive to objectification and I was not keen on [the lyrics] ‘in love with your body’ so I suggested the more abstract ‘shape of you’, although both appear in the song in its finished form.”

McDaid claimed that he could not remember who came up with the “oh I” section, which he described as “filler” that was added in order to “make the song flow”.

Earlier in the case, the court heard how Sheeran and McDaid had previously settled a plagiarism case over their 2014 song ‘Photograph’, though McDaid said they did not believe they had copied parts of another track for it.

It was also noted that the pair had added the writers of TLC’s ‘No Scrubs’ to the ‘Shape Of You’ credits following comparisons between the two singles.

McDaid, however, “wholeheartedly disagree[d]” with the suggestion those previous situations indicated that he “was in the habit of consciously or sub-consciously appropriating the skill and labour of other songwriters during my songwriting and recording sessions”.

“It is simply not true and I feel that is a very serious thing to suggest about me and how I work,” he said in his witness statement.

Royalties from ‘Shape Of You’, estimated to be worth £20million, have been frozen since Chokri and O’Donoghue issued a claim for “copyright infringement, damages and an account of profits in relation to the alleged infringement” in July 2018.

Earlier this week, Ed Sheeran revealed in court that he had written 25 songs with The National‘s Aaron Dessner.