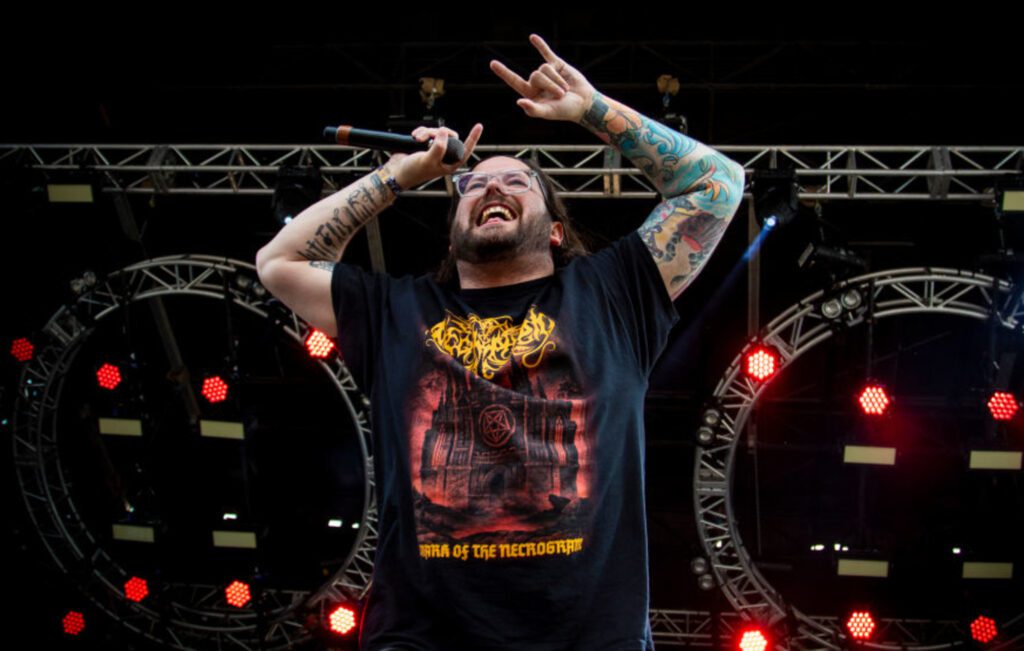 Trevor Strnad, the frontman of melodic death metal band The Black Dahlia Murder, has died at the age of 41.

The musician’s death was confirmed by the band, who shared the news in a statement on Instagram.

“It is with deep sadness that we announce the passing of Trevor Scott Strnad,” The Black Dahlia Murder wrote. “Beloved son, brother, and Shepard of good times, he was loved by all that met him.”

They continued: “A walking encyclopedia of all things music. He was a hugger, a writer, and truly one of the world’s greatest entertainers. His lyrics provided the world with stories and spells and horror and whimsy. It was his life to be your show.”

While no official cause of death has yet been revealed, the band shared the phone number for the National Suicide Prevention Lifeline at the end of their post.

A post shared by The Black Dahlia Murder (@theblackdahliamurder_official)

Strnad was a founding member of The Black Dahlia Murder – whose name is derived from the 1947 unsolved murder of Elizabeth Short, often referred to as Black Dahlia – and was part of the Michigan band’s original line-up that released their demo ‘What A Horrible Night To Have A Curse’ in 2001.

A number of people have taken to social media to share tributes.

Hatebreed frontman Jamey Jasta tweeted: “RIP Trevor Strnad, you’ll be missed dearly, my deepest condolences to TDBM, his family, friends & fans. Thanks for all the laughs, the stories, the music, & so much more.”

“metal wouldn’t be what it is today without him. can’t believe it. RIP trevor strnad,” Stray From The Path drummer Craig Reynolds wrote. “every death metal band with two singers only has two singers because neither of them could do what he did.”

Born Of Osiris drummer Cameron Losch tweeted: “Man wtf. Trevor was such a legend and huge musical influence on me growing up. Nicest guy too. My condolences to his family and friends. RIP Trevor Strnad.”

RIP Trevor Strnad, you’ll be missed dearly, my deepest condolences to TDBM, his family, friends & fans. Thanks for all the laughs, the stories, the music, & so much more. ❤️❤️❤️

Man wtf. Trevor was such a legend and huge musical influence on me growing up. Nicest guy too. My condolences to his family and friends. RIP Trevor Strnad 🖤😢

You can see more tributes below:

Our hearts go out to Trevor Strnad’s family and loved ones. He lit up stages and grimy green rooms alike. We were once privileged to see him do so nightly, many years ago during a special time in our young lives. Rest easy old friend. 🖤

Has there ever been a better death metal lyricist than Trevor Strnad? I really don’t think so. He was the ultimate storyteller, a guy who could put himself in a person’s shoes and tell their twisted tales with a level of eloquence that belied the grisly detail. The GOAT.

I’m absolutely gutted hearing Trevor Strnad has passed on. Idk what i’d be doing music wise if it weren’t for The Black Dahlia Murder’s influence. Dude was super chill and his vocal performance and stage presence were always on point. RIP Legend pic.twitter.com/sn4R9JLgWZ

Trevor Strnad, a beacon of bizarre light making the world a more interesting place. He got me & countless others into our favorite bands. Diligently supporting his friends with a crazy smile on his face, and now he’s gone. Fuck.

Trevor Strnad has never been anything but a beacon of positivity, heavy metal knowledge and good times to me. What a massive, massive loss. RIP

RIP TREVOR STRNAD. I have never been left speechless by a death like this.

Fuck me. Trevor Strnad is dead. He was everything. Rest easy dude. pic.twitter.com/Q48BPw1994

RIP Trevor Strnad, that dude supported Hekseblad as far as I know, he follows us on instagram and their bassist was just messaging us the other day about how much he liked our music and what were doing to the scene and sent Trevor over our music video.

RIP Trevor Strnad. Super good guy. Always made time for fans like me. Always up for a laugh on here. No official cause of death, but the band put out the suicide prevention hotline with the notice. Please reach out to friends and family when life is too hard. We want to help.