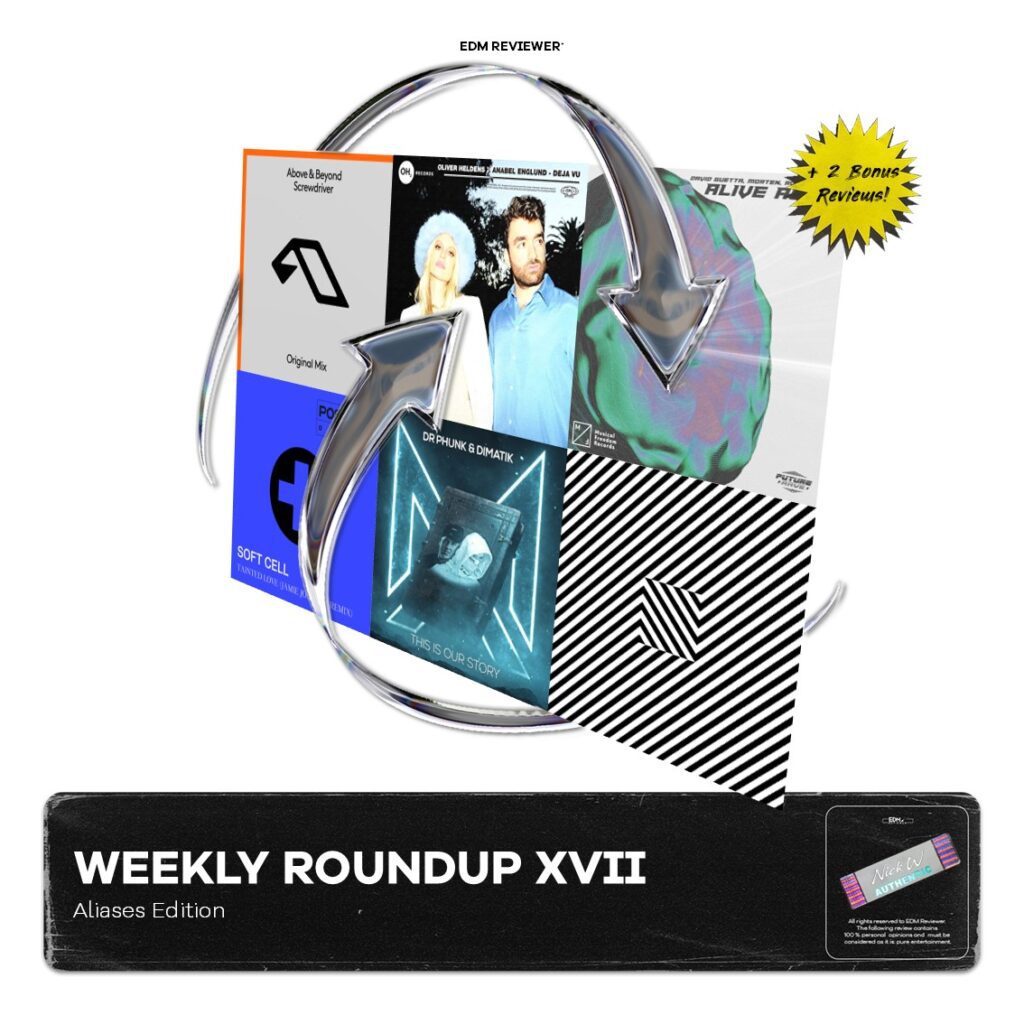 Busier times has followed with advent of December for me, so apologies for the last roundup being absent. Musical aliases, on the other hand, have been on the grind and so on this special instalment of roundup, there’s releases from this and the last Friday. Let’s cut to the chase then!

“Alive Again” stretches the set boundaries and expectations by the renowned duo, not falling prey to repetitive standards.

Fun fact #1 – I can’t get enough of Oliver Heldens.

A “Deja Vu” to his old-school Future House sonic stamp, the A-one Dutch producer hasn’t hesitated to bounce to and fro between fringes of genres. Pairing up with LA based vocalist Anabel Englund, the Heldeep owner carved out a delectable and fashionably funky record, livened up by the breezy and charming voice provided by the songstress.

Yes, a straight eighty for the third time.

Why not, it’s a superlative tune from the established British trio Above & Beyond! “Screwdriver”, although strangely titled, it functions on a breakbeat drop with Electro synths, while the breakdown is augmented by recognizable Trance-y plucks. The second half brings out a touch of filthy acid and upbeat piano, an homage to the 90s electronic.

Gracing Dixon’s Innervision with his idiosyncratic sonic panache is Jimi Jules, a familiar face on the leading imprint.

The Swiss act is known to blend minimal house and techno without hesitations, yet “My City’s on Fire” is an indie dance/post-disco techno-pop song that brings along a heavy lead synth, not discarding the essentials: spaced out and lush schematics to keep it engaging.

I have remained out of touch with hardstyle lately, and that has reflected on the earlier roundsups unequivocally. Let me make up for that real quick.

Hardstyle specialist Dr Phunk meets the Hard dance expert Dimatik in this showdown, as “This Is Our Story” stampedes with assortment of kicks and screeching synths, with an euphoric and anthemic mood. Maxximize didn’t miss with this one, as it delivers to expectations.

About four decades back, British duo Soft Cell put out “Tainted Love” – a melancholically sparse ballad wrapped around frolicking synths, an unheard combination that turned out as a massive hit from the British new wave era.

Being one of my favourite gems, I hesitated to press play on this modern take, even if it’s from the House maestro Jamie Jones. After listening, I won’t deny that this isn’t your run-of-the-mill remix. There’s a quirky tech house beat, far more fit for the current times, not over rigid to being commercial or radio friendly. Perfectly fit according to the original, a creative spin that shines on it own!

Finding his way back to Revealed after a year or so, the Swedish progressive house ace Manse teamed up with upcomer Neyra and the renowned Nino Lucarelli.

A fetching experience to say the least, “Find A Way” is unapologetically dreamy and uplifting, with Manse’s hallmark radiating as usual. Although predictable, the feelgood-ness here is plenty to satisfy!

No roundup is complete without featuring a lesser known but talented name, and for that I will briefly talk about “Adrenalize”.

Audio-engineered by Polish producer PARØ, this Notation records’ track reminded me fondly of JAGGS by its swanky and swing-laden Electro/Bass House rhythms, armed to the teeth with snappy one-shots. The breakdown evolves the tension without making it awkwardly short, spanning out towards a mildly different version of the drop. No compromises here, undoubtedly creative!