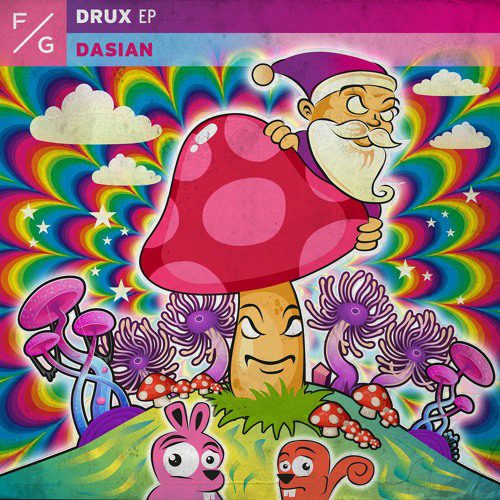 Upholding a bold statement about their prolific visions, FVCK GENRES has greatly favored shifting between the demarcations of several EDM genres. Their latest upload, “Drux” EP is no exception either.

Architected by a rather unfamiliar name for my memory, the two productions from the Dutch talent Dasian has enough potency to deliver a “wow” factor, which led me to write this article right after listening.

With a trippy naming, the title track is that kind of speedy bass house that escalates over to neurotic Drum’n Bass, leaving me mentally raving. Joyride, a pioneer in this category, took it to the extreme. Dasian, on the other hand, stitches his heavy-trap influences on the breakdown to create this insane triad of genres. Everything fits, and makes plenty buzz to up the ante of fun associated with this drop! The intricate structuring, which even left the scary menace by introducing a hardstyle kick for a few seconds (!), engaged in this dueling rhythm despite the risk of losing balance and getting messy. The finale, as contemplated, explores a range of Dasian’s percussions in tune with the DnB flavor and.. Hard trap leads?!

The following protagonist of this narrative is “Losing Control”, whose orientation is old-school, based on the sampling timbre. There are Tech House ingredients merged with hefty, dark, and gritty Bass House sequences, as I couldn’t stop admiring the different fills that Dasian put throughout. The vocal clashes with the rest, the loop was performed for a lesser aggressive tune, but at this point, I couldn’t care less about nitpicking. The brutalism of the drop and the attention to detail regarding the percussive contents is what hit home after listening.

I might not be fully acquainted with Dasian yet, but “DRUX” is an entertaining EP that speaks volumes about his creative persona. Plenty of fun on this one!

You can listen to “Drux” here: