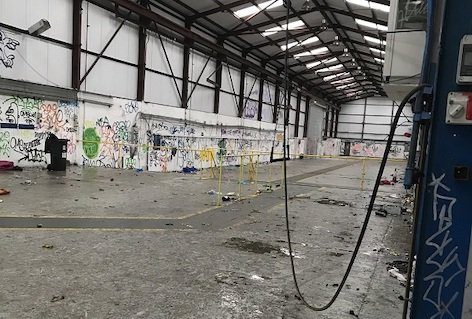 An investigation has been launched after a 28-year-old woman was mauled by a police dog at an illegal rave near Bristol, the Guardian reports.

The incident took place some time after 10:30 PM on Halloween in Yate, a town about ten miles from Bristol. Police were called to a warehouse rave attended by hundreds of people. While the venue was being cleared, which had been running for nearly 24 hours, a police dog was set loose on Jessica Mae Andrew, allegedly without warning.

“The officers opened their wall of shields up slightly and the next minute the dog was mauling the top of my leg,” Andrew told the Guardian. “My leg is totally a different shape now as it pulled so much fat from the top.”

Andrew, who is taking legal action against the police, was hospitalised with life-changing injuries. After being made aware of the incident, the Independent Office For Police Conduct (IOPC) has allowed the Avon And Somerset branch to conduct an investigation into the incident.

“There appears to be no justification at all for the dog in this case either being instructed or allowed to bite Jess, compounded by the lack of care and control displayed by the police handler who allowed his dog to maintain its attack on Jess for so long,” Andrew’s solicitor, Iain Gould, told the Guardian. “My client has effectively been maimed for life, for attending a dance party.”

According to the Avon And Somerset chief constable, Andy Marsh, attendees at the rave hurled abuse, bottles and fireworks at the police before it was shut down. Eight people were arrested, equipment was seized and the two organisers each received £10,000 fines.

Though the event took place just before the UK entered its second lockdown, the restrictions in England at the time banned all indoor gatherings of more than six people.

Watch a video of the incident, and a longer video taken over the course of the night. (Warning: some viewers may find the footage distressing.)

An investigation has been launched into a police dog attack on a woman that left her with life-changing injuries.

The incident, which occurred during an operation to shut down an illegal rave on the outskirts of Bristol,https://t.co/QAVgy6f3YO pic.twitter.com/R82LJ7iL4e