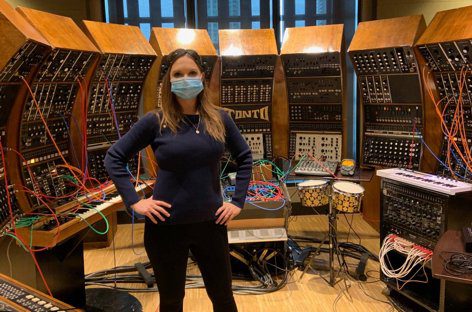 A Canadian artist named Angie Coombes has programmed a 52 year-old synthesizer using only her brainwaves.

As Music Radar reports, Angie Coombes programmed the gigantic TONTO synth—at its current home at Calgary’s National Music Centre—and described the process in detail to the CBC in a podcast.

Coombes wore a headset connected to a computer which converted her thoughts into voltages that were sent to patches on the synth, so that different thoughts and feelings would affect volume, pitch and tempo. More complicated thoughts or concepts led to more varied effects. She called the process, especially given that it was done on an analogue synthesizer more than 50 years old, a “world first.”

TONTO—The Original New Timbral Orchestra—is a massive analogue synth created by Malcolm Cecil and Robert Margouleff, which was purchased by the National Music Centre in 2013 and comprehensively restored. It was famously used by Stevie Wonder on classic albums like Talking Book and Innervisions, and also by acts like Weather Report, Quincy Jones, Gil Scott-Heron, The Doobie Brothers and more.

For more on the process Coombes used with TONTO, listen to the Calgary Eyeopener podcast over at the CBC.