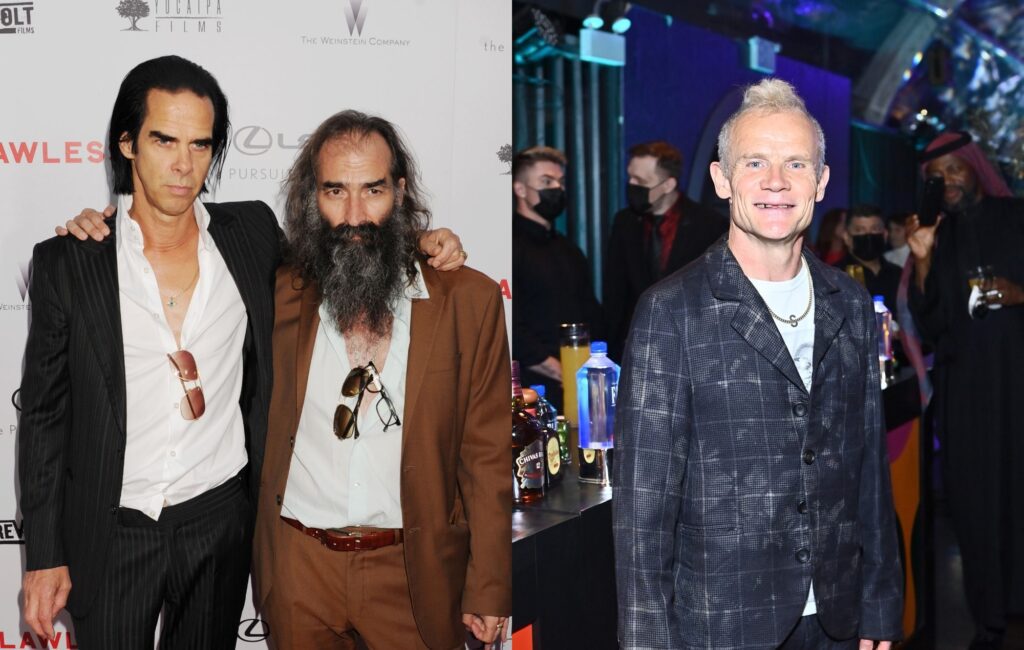 Red Hot Chili Peppers’ Flea joined Nick Cave and Warren Ellis onstage in LA last night (March 9). Watch them perform The Bad Seeds’ ‘We No Who U R’ below.

Joining Cave and Ellis for the second encore of the night, Flea helped them perform the opening track to The Bad Seeds’ 2012 album, ‘Push The Sky Away’. This was the song’s debut on the pair’s current tour for their acclaimed 2021 album ‘CARNAGE’, and the first time that the song has been played in seven years.

The bassist added his own meandering style to the track, before embracing Cave and Ellis at the end of the song.

After the concert, Ellis took to Instagram to share a photo of the two, writing “Flea, beautiful brother. So wonderful to have you on stage tonight in Los Angeles with me and Nick at The Shrine. Can feel the soul pour out of you on stage.”

While Ellis and Flea have a history of performing together (they did a whole concert together at Paris’ Le Trianon in 2014), Cave has a more troublesome relationship with the Red Hot Chili Peppers.

Nick Cave is widely reported as having infamously slammed the band in 2004, as once quoted in a Guardian review of ‘Stadium Arcadium‘.  “I’m forever near a stereo saying, ‘What the fuck is this garbage?’,” Cave is reported to have said. “And the answer is always the Red Hot Chili Peppers”. But it seems like Flea didn’t take that criticism to heart.

Responding on RHCP’s official website two years later, Flea explained: “For a second that hurt my feelings because I love Nick Cave. I have all of his records. I don’t care if Nick Cave hates my band because his music means everything to me because he is one of my favourite songwriters and singers and musicians of all time. I love all the incarnations of the Bad Seeds.But it only hurt my feelings for a second because my love is bigger than all that shit ,and if he thinks my band is lame that’s OK.”

Flea echoed these sentiments in an interview with The Guardian in 2011 when he said: “Creativity waxes and wanes. We’re very lucky. We’ve made bunches of fucking money. We could be sat on the beach eating burritos, but even when we’re pissed off with each other we sit in a room and work.

“Igor Stravinsky sat at his piano every fucking day. Some days it was rubbish and his wife was chewing his ear off – but he stuck at it. The same thing goes for Nick Cave, the greatest living songwriter. He goes to work! Every day. And that’s what we do.”

See more photos and footage of the performance below.

The 21-song setlist pulled heavily from Nick Cave and Warren Ellis’ work together with The Bad Seeds but also included a cover of T-Rex‘s 1971 track ‘Cosmic Dancer’. Check out the complete setlist below:

Warren Ellis and Nick Cave are currently in the middle of their first US headline tour as a duo, in support of 2021’s ‘Carnage’.

Warren Ellis and Nick Cave are set to play:

The Bad Seeds will then perform a season of festival shows throughout Europe this summer.

After cancelling shows in Russia and Ukraine, Cave then responded to “double standard” accusations over his stance on Israel and Palestine.

Cave and Ellis also recently shared details of the cinema release for their forthcoming film This Much I Know To Be True.