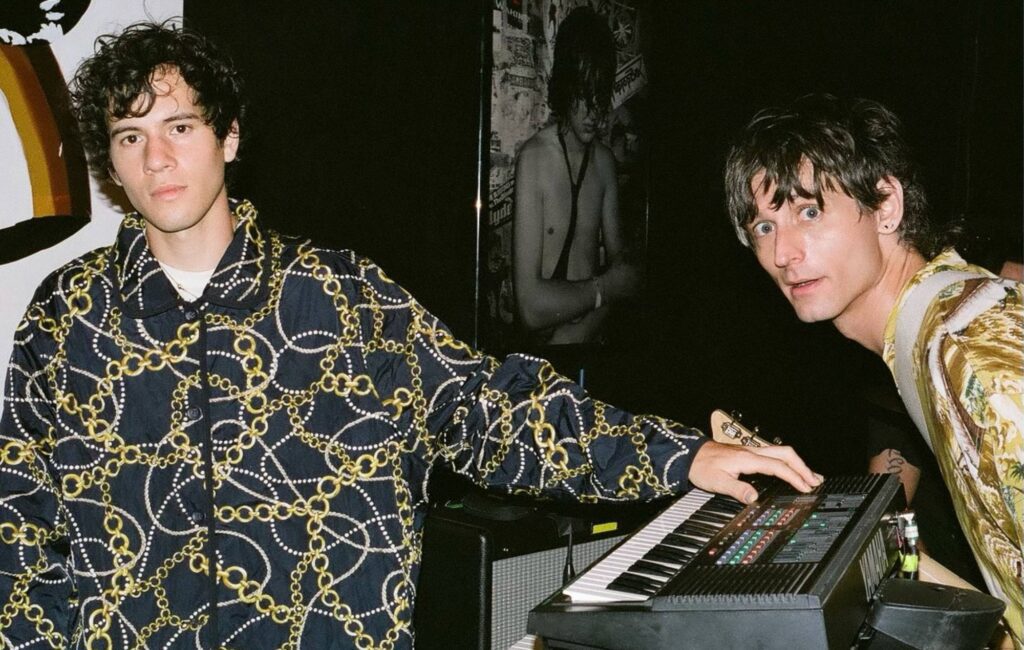 Brad Oberhofer, the mastermind behind experimental indie outfit Oberhofer, has spoken to NME about wanting to smother the world in optimism, the enduring legacy of The Strokes and his new single ‘SUNSHiiNE’. You can hear the gleeful dream-pop song, which features vocals from Shamir and a blistering guitar solo from The Strokes’ Nick Valensi, below.

Oberhofer’s last studio album, ‘Chronovision’, was released back in 2015. Now signed to Telefono Records, Oberhofer is preparing to drop his new album ‘Smothered’ on November 12 and has previewed the record today (October 7) with its latest single ‘SUNSHiiNE’, a song that Oberhofer has described as “carelessly experimental”.

“It just goes where it wants to go, and it’s also the first song that has contributions from other people,” he told NME. “Life is too short not to be experimental. I don’t want to live a life where I don’t get to try weird things out.”

Written “in the spirit of love, fun and carefreeness”, the musician said that the track is “half about the feeling you get when you get a message from someone that makes your whole day better, but it’s also about self-reassurance, believing in yourself and reminding yourself that external validations don’t matter”.

Speaking about the first of the two big-name guests on ‘SUNSHiiNE’, Oberhofer recalled: “Shamir and I had been talking, so I sent him the record and asked him what his favourite song was. He said ‘SUNSHiiNE’, so I just asked if he would say this spoken-word part in the middle of it. It was really fun.”

Valensi’s involvement in the track came about due to Oberhofer’s involvement in the former’s other band, CRX. “I’ve always loved Nick’s insane guitar solos,” Oberhofer told NME. “He’s such a fun guy to be around, as well as being an awesome, creative, brilliant musician. When I was 12, I heard ‘Reptilia’ on the radio and it actually made me think guitars are cool. Before that I was just making beats, but it was Nick’s part on ‘Reptilia’ that made me want to play guitar.

“I asked him if he would throw down a guitar solo for this track. I had sketched out something that was basically me trying to impersonate Nick and then he came in, and we made this crazy hybrid version of the solo. It’s such a moment.”

Valensi told NME that he and Oberhofer “hit it off immediately” when they were initially introduced by the former Cerebral Ballzy frontman Honor Titus.

“I asked [Oberhofer] to play keys with CRX right when I met him,” Valensi said. “His playing’s so effortless and natural. The songs he writes are exciting and unpredictable. A lot of what he does feels like it’s out of left-field, and I mean that in a really good way. I’m always blown away by Brad’s creativity.

“I volunteered to play on [‘Smothered’] before hearing any music, I just knew it was gonna be hella good. Also, I love Brad. When he sent me the track I got really excited — it’s super catchy and got stuck in my head. I went to the studio, recorded the guitar solo in a few takes and made it home in time for dinner. It was a super-fun and easy process.”

Speaking about the enduring influence of The Strokes, Oberhofer told NME: “They’re such an influential band because they came up at a time when everybody was still living in the shadow of grunge. Everybody was making this heavy, masculine, post-grunge music and, honestly, most rock music was pretty bad. But then The Strokes came out with ‘Is This It?’. The songs were so tight, so composed, but so reckless at the same time.

“And those guitar solos are insane. Because of grunge, you weren’t hearing these concise, genius guitar solos, which is what Nick did on all those records. And you weren’t really hearing anyone sing like Julian [Casablancas], whose voice was just reckless in a way. Their music is never self-important and not pumped with ego, it’s held back in a way that was really refreshing at that time and still is.”

Oberhofer also recalled the moment he professed his admiration for The Strokes to Valensi after he joined CRX.

“I kind of held off, but after a while I was like, ‘Just so you know, you’ve written some of my favourite guitar parts of all time and it kind of inspired me to play guitar, so it’s a big deal to me’. He was modest about it, though.”

As for if there’ll be any more Valensi collaborations, Oberhofer said: “Nick, Jon [Safley] and Darian [Zahedi] were working on some stuff for CRX in the studio while I was making this album, but we’ve talked about working on some things together in the future. Nick and I are friends, so I’m sure we’ll make more things.”

Inspired by the likes of OutKast as well as Tyler, the Creator’s ‘IGOR’, Oberhofer wanted his new album to feature a revolving cast of characters: “I’d written all of my other records by myself and I didn’t want to remember this album as me being alone. I wanted it to feel more like a community, so I just asked whoever I thought would add something great.”

As well as Valensi and Shamir, ‘Smothered’ also features guest appearances from King Princess (“Mikaela is so inspiring and such a force”) Girlpool, Jónsi and Teddy Geiger.

“Smothered’ is about recapturing joy,” Oberhofer told NME about the upcoming record. “When I started making music I was super wide-eyed, optimistic and thought I was gonna say whatever I was thinking and not be scared.

“Over time, people really rejected that optimism and tried to smother that joy with cynicism. I watched my previous label smother every song I made with the fear of it failing commercially. I just didn’t want to be a part of that anymore. I also went through some traumatic life experiences: losing some friends, going through some break-ups where my partner criticised my essence.

“But this album is me trying to regenerate. Instead of cynicism, I wanted to smother the tracks with love. The songs and I built each other up at the same time, and I found myself again. Incorporating other people [into the recording process] made me feel a sense of deepening friendship and community.”

Oberhofer says that ‘Smothered’ therefore represents “not allowing people to smother out your spirit”.

“Instead, channel everything you have into smothering the world around you with as much beauty, joy and excitement as possible,” he said. “I think the world could use a couple of happier songs. This record is about opening the floodgates for me. There’ll be no more waiting six years to release an album anymore.”