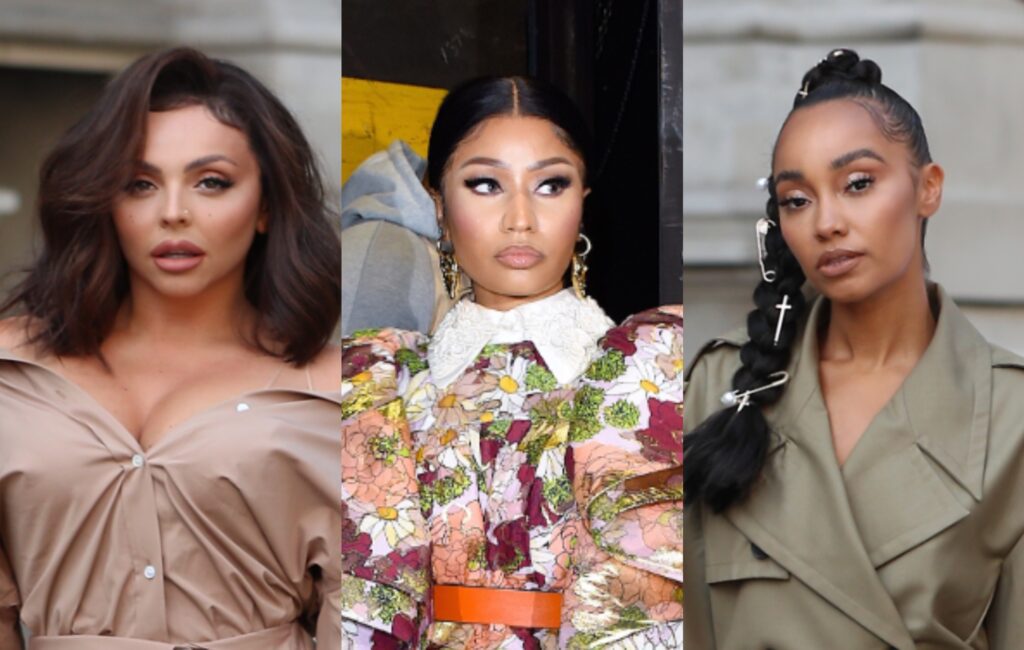 Nicki Minaj has weighed in on the debate around Jesy Nelson and Blackfishing, going as far to call Nelson’s ex-Little Mix bandmate Leigh-Anne Pinnock “a big jealous bozo”.

In an Instagram Live between Minaj and Nelson yesterday (October 11), the rapper referenced messages allegedly shared between Pinnock and Instagram user @nohun_ that were posted on social media.

In a screenshot, posted by @nohun_ and seen by NME, Pinnock appears to have suggested that the influencer make a video about Nelson’s “black fishing” as opposed to a dance to her debut solo single ‘Boyz’, which features Minaj.

Pinnock then claims that Nelson blocked her and her Little Mix bandmates, Perrie Edwards and Jade Thirlwall, and cut them off, before saying that she’s a “horrible person.”

Towards the end of the hour-long livestream, Minaj criticised the exchange, saying “Take them text messages and shove it up your fucking ass, because when you do clown shit I got to treat you and talk to you like you a clown.

“If you was in this woman’s group and you ain’t talk about this shit for 10 years,” Minaj continued, “and as soon as you see she got a video coming out with Nicki Minaj and Puffy, now you sending text messages and all this shit…print those text messages out, bust your ass open and shove them up your motherfucking ass.”

“Stop trying to hurt people and kill people’s lives and careers, this is the way people feed their families. Stop – if you want a solo career, baby girl, just say that.”

“Only jealous people do things like this,” Minaj continued. “It makes you a big jealous bozo. I love you guys but please don’t do this. Let these people be miserable all by themselves.”

Nelson, who sat quietly and occasionally laughed during Minaj’s criticisms, went on to say that a member of the band – presumably Pinnock – addressed Blackfishing with her on set of the final music video she filmed with Little Mix before leaving back in December, ‘Sweet Melody’.

“It’s just hard for me because I was in a group with two women of colour for nine years,” Nelson said, “and it was never brought up to me up until the last music video when she messaged me and said ‘Jesy, I just want to make you aware’…”

Minaj then posted more videos on Instagram, asking why Pinnock didn’t make these comments around Nelson when Minaj collaborated with Little Mix on 2018’s ‘Woman Like Me’.

“To shorty in the group, why you wasn’t mad when I worked with y’all before?” she said.

“Why you wasn’t mad that I didn’t call out Jesy before when I was working with y’all as a group? Why wasn’t there an uproar in the UK and the US before I met her? Jesy has been selling millions and millions of records for the last decade.”

Finally, Minaj took to Twitter to condemn Pinnock further, calling her ‘JeLeigh’ and referenced Nelson’s past struggles with mental health due to bullying.

“If you know someone has been suicidal from bullying in the past, why try to get a bunch of ppl to bully them again about smthng else, on an even bigger scale? Shame on you— that’s rlly sad. You don’t know what ppl can deal with.”

JeLeigh btchs actin real messy. ~ if you know someone has been suicidal from bullying in the past, why try to get a bunch of ppl to bully them again about smthng else, on an even bigger scale? Shame on you— that’s rlly sad. You don’t know what ppl can deal with. 🙏Mental Health

Pinnock has yet to publicly respond to either Minaj or Nelson’s comments.

In a recent interview with Vulture, Nelson addressed the Blackfishing claims, saying, “The whole time I was in Little Mix I never got any of that. And then I came out of [the band] and people all of a sudden were saying it.

“I wasn’t on social media around that time, so I let my team [deal with it], because that was when I’d just left.”

She later gave a statement, saying, “I take all those comments made seriously. I would never intentionally do anything to make myself look racially ambiguous, so that’s why I was initially shocked that the term was directed at me.”

Nelson signed a solo record deal with Polydor back in May, while Little Mix are set to release their first album as a trio, greatest hits collection ‘Between Us’, in November as a celebration of their 10 year anniversary.