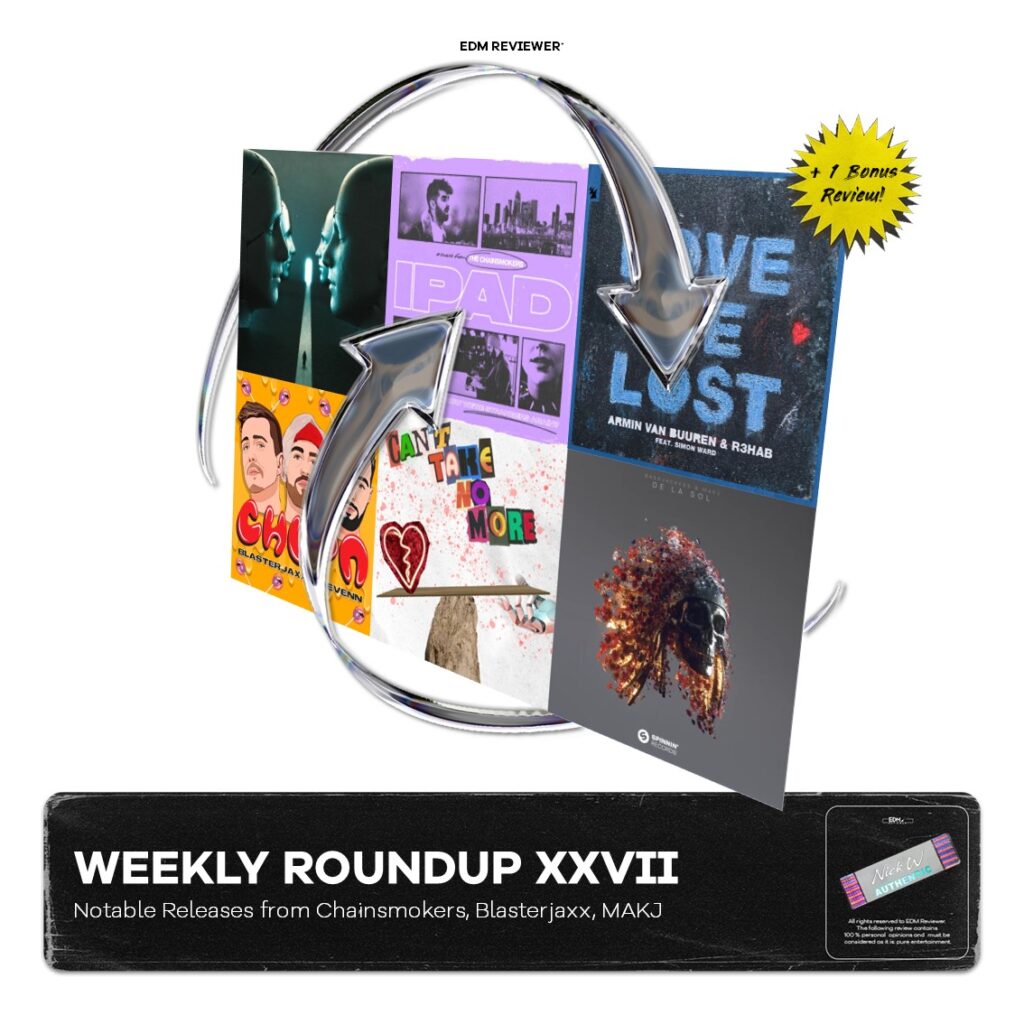 The second week of March is no stranger to notable releases: Chainsmokers, Blasterjaxx, MAKJ, and more are in this week’s Instalment of the roundup!

After dabbling with Techno in “We Can Dance Again”, the Dutch heavyweight took a sharp U-turn towards radio-ready sounds, and even he is known to have succeeded towards more commercial sounds, this attempt isn’t as inventive.

Grouping up with R3HAB, the duo went for a standard future house layout with an upbeat tonality thanks to the commonplace major pop chord progression. Although the vocal and synths combination is appealing, the creativity applied here is mediocre.

Turning away from the melodic trap sound they helped pioneer for a while, the American duo revealed their follow-up single for their upcoming album “TCS4”, further co-produced by Ian Kirkpatrick (Dua Lipa, Selena Gomez).

Heartbreak lyricism and shimmering arrangements get together in a rather linear instrumental in this unconventionally titled song, although the outcome is fairly grabby. Further likable moments come in the form of vocoded vocal hooks, shiny brass hits, and other softer additives that suits for a laid-back listening.

More than a decade since forging their first alliance, industry icons Deadmau5 and Kaskade have taken the major initiative of pairing up under “Kx5”, as their début single featuring Hayla revealed after several hyped teasers.

Renewing their zeitgeist progressive sound best represented in “I Remember”, the production fluently flows on the muted and resonating electro plucks that defined the genre, with a equally impassioned vocal performance to match the radiance.

It’s simple and lush, no-frills. Deserves a listen just for the nostalgia alone.

The “Derp” creators reunited for a squeaky festival weapon “De La Soul”, which is their third collaboration in the row.

It is assuring to hear Melbourne Bounce influences being abundant here, coupled with detuned synth leads that add the Dirty Dutch flavoring on the drop. Yet, the breakdown loses the charm, unlike its primary precursor, toning down the drop components and bringing them back-up right before the second climax comes in.

There was plenty of space for an energizing breakdown rather than forming a transition bridge from drop A to drop B. Overall, it delivers the intended energy.

Marching ingeniously towards variating his gaining expertise in other styles, the Italian upcomer ELYX synergized with the talented vocalist EMMA LX for a charged-up performance in “Can’t Take No More”.

Starting with a round of heartfelt vocals backed by acoustic elements and airy synths, the drop leaps in, full of life, with wobbling future house synths fashioned expertly in the recognizable ELYX style.

Brilliant opening from the young creator for this year, and hoping to see him thrive equally in the future projects he has in store!

Classic and anthemic big room meets the jacking Brazilian bass sounds in “Chupa”, as the triad concocted a spicy recipe to be unleashed on the dancefloors.

The bright supersaw melody opens the radio edit version, while the drop kicks in with a thick and girthy low-end from the American producer, while the duo polished it with their festival nuances. If I had to nitpick, the vocal shots get a tad repetitive, although the assortment is fairly capable of wrecking the crowd.

There’s no mistake here except in the title, as Bleu Clair once again demonstrated his skills with the House genre, crafting a solid composition. The delicate lead, with a clear vintage vibe, clashes surprisingly with the energetic percussions, with a bittersweet feeling that was difficult to achieve.